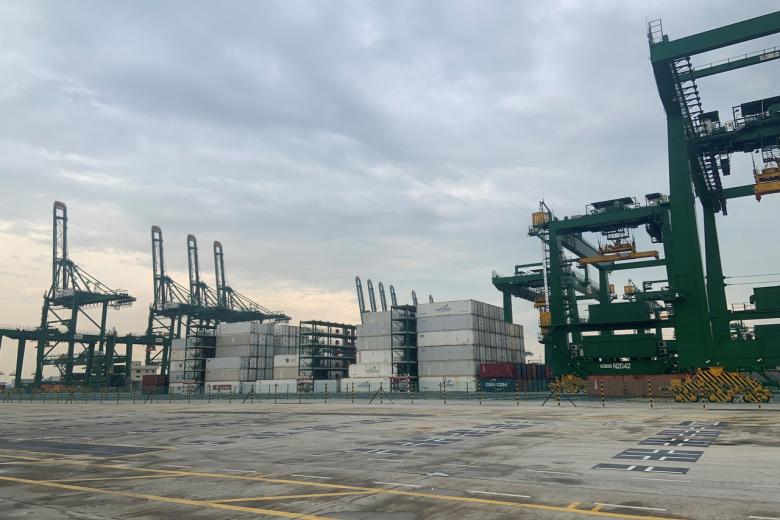 SINGAPORE – The not-yet-operational Tuas Port is already being used to store containers, as Singapore ports, operating round the clock, ramp up resources and capacity to help tackle the global supply chain disruption.

The logistical nightmare has been the result of manpower shortages and port closures elsewhere caused partly by Covid-19 restrictions, and an increase in demand for goods as repressed consumers start spending again after the pandemic eased.

Speaking to reporters on Wednesday (Oct 20), Senior Minister of State for Transport Chee Hong Tat said Singapore is acting as a “catch-up port” to help alleviate the pressure of supply chain bottlenecks around the world.

With congestion in upstream ports, vessels have been arriving off schedule, resulting in significant “bunching”.

Already, global vessel schedule reliability has halved from 75 per cent in the past few years to 35 per cent to 40 per cent this year. On average, ships are now delayed by 7.5 days.

This also means more containers are stored here for a longer period of time before being loaded on vessels for shipment elsewhere, Mr Chee added.

He said PSA Singapore has been working hard to help vessels make up for delays along other parts of the supply chain, by, for instance, helping them better plan their routes.

He cited the example of a vessel that had to skip a port call in the Middle East due to the Suez Canal blockage in March.

That vessel unloaded 2,700 boxes originally bound for the Middle East in Singapore, which, in turn, loaded them back onto ships sailing back to their intended destinations.

“In doing so, PSA has enabled the shipping line to skip a port, so as to catch up on its schedule, after a two-week diversion around the Cape of Good Hope,” Mr Chee said.

During a period of 15 days in April, PSA handled 45 Singapore-bound container vessels that fell behind schedule due to the Suez Canal blockage, and helped them with their deliveries.

In May, PSA helped with the rerouting of some ships and cargo when the Yan Tian port in China was closed for three weeks due to a Covid-19 outbreak.

“We have become the go-to port for shipping lines to catch up on lost time and connections, and also to untangle some of their operational challenges,” Mr Chee said.

“We are not just a catch-up port, but also a one-stop shop, where we offer a range of different services to the shipping lines… such as bunkering, supplies, crew change.”

He noted, however, that this comes at a cost.

“While it helps to reduce the overall delays of global supply chains… boxes stay in our yards much longer than before. As more ships come to Singapore to make use of our one-stop service and catch-up service, it does also add on to the queues and the waiting times (here),” he said.

Singapore’s container activity in the first nine months of this year has already grown by 3.4 per cent compared with the same period last year. Compared with 2019, pre-pandemic, it is still 2.4 per cent higher.

MORE ON THIS TOPIC
Ships arriving late in S’pore due to disruptions at other ports
Broken supply chains: Why a US$648 bike costs US$477 to ship to S’pore

Mr Chee said that to boost capacity, PSA Singapore opened the yards in Tuas Port last month to add about 2,000 TEUs (20-foot equivalent units) of capacity. The unit refers to the dimensions of a standard shipping container.

The port operator has obtained clearance to designate Tuas Port as a free trade zone, to further facilitate the movement of storage of cargo.

It also reopened eight berths in Keppel Terminal last year to add another 65,000 TEUs in storage space. In addition, more than 2,500 locals were hired, boosting the number of port workers by around 20 per cent.

Beyond ramping up port operations, PSA is also expediting the movement of more critical materials, including semiconductors, while working with small and medium-sized enterprises to make sure cargo flows from China to Singapore stay punctual enough for them to meet their project deadlines.

It has also been examining other joints along the supply network, and has been providing data and advice to shipping companies and cargo owners on how to plan their routes better.

“Through proactive planning, effective communication and enhanced productivity, our aim is to help them catch up on their delayed vessel schedules, shorten the transit time of boxes and fulfil more cargo connections,” Mr Chee said.

“(Taking on this bigger role) is a conscious move based on longer-term strategic considerations and because we recognise our global responsibility as a key transshipment hub port.”

But Mr Chee also noted that the problem is a complex one that Singapore cannot solve alone. The many players involved means the Republic can only work to mitigate and reduce the burden that shipping lines and their customers are faced with.

The supply chain disruption has ignited concerns that higher material and shipping costs will create inflationary pressures worldwide, even as economies everywhere make tentative recoveries from the coronavirus crisis.

Mr Chee said it is difficult to assess what overall impact on other goods the supply crisis, which has so far most adversely impacted higher-value products, will have.

But Singapore has widened its supply sources, including for food, he said.

“The more diversified, the more wide-ranging our supply sources are, the greater the confidence that will be in terms of being able to withstand any cyclical source disruption.”