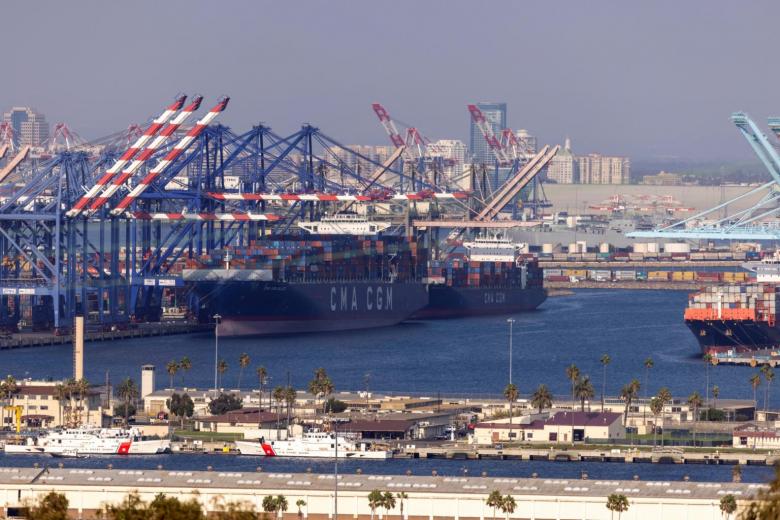 NEW YORK (BLOOMBERG) – Storm season is coming to the shores of Southern California, and that could make global supply chain bottlenecks even worse.

Close to 160 vessels are waiting to enter the Long Beach and Los Angeles port complex – some mega-sized container ships carrying as much as half a million tons of everything from consumer goods to factory inputs. The build-up of cargo outside the main United States gateway for Chinese exports is contributing to goods shortages and prices hikes ahead of the Christmas shopping season.

But a new worry is bubbling up from the port gridlock: The area’s storm season that is already under way will bring high winds and choppy seas, potentially leading to accidents among ships jostling for space.

Ships waiting to use the Port of Los Angeles hit 14 days at anchorage this week, about the same amount of time it takes to cross the Pacific, according to port data. Before the coronavirus pandemic, it was rare for a ship to be at anchor at all, said port spokesman Phillip Sanfield. The combination of stormy weather and congested waterways has become so critical that the US Coast Guard issued a winter weather advisory on Thursday (Nov 4), requesting, among other things, that large ships remain three nautical miles apart from each other, be prepared to deploy a second anchor when winds are strong and keep their engines on standby.

The danger of ship accidents is not just theoretical. The US Coast Guard last month said an oil spill off the coast of Southern California – near the ports where ships were dwelling in record numbers – happened after a ship’s anchor struck an undersea pipeline operated by Amplify Energy Corp as long as a year ago, weakening the line. The Coast Guard has also been investigating an incident involving the MSC Danit cargo ship, which dragged its anchor during a winter storm in January in close proximity to an undersea oil pipeline.

Large ships such as the massive container vessels parked off the Southern California coastline can be blown around, said Dr Paul Blomerus, executive director of Vancouver-based Clear Seas Centre for Responsible Marine Shipping. Where there is congestion at a port, there is an increased risks for some accidents, including collisions. In March last year, the bulk carrier Golden Cecilie collided with the bulk carrier Green K-Max 1 off British Columbia amid gusting winds, entangling both vessels’ anchor chains.

In a recent high-profile example, strong winds blew the heavily-laden cargo ship Ever Given aground while transiting the Suez Canal in March, blocking traffic on the world’s most important waterway for almost a week.

Gridlock in California’s San Pedro Bay complex is happening at a time when Covid-19 has extended the length of time seafarers are serving on ships, leaving them tired, stressed and potentially more prone to making mistakes, according to Professor Mikis Tsimplis from the City University of Hong Kong law school and a specialist in maritime law. Ship congestion can increase the possibility for mishaps even during regular winter storms, he said.

Stormy seas played a role in the loss of 3,000 shipping containers last year, more than double normal losses, and close to 1,000 during the first few months of this year, according to the Allianz Safety And Shipping Review 2021.

The California storms have already begun.

On Oct 22, ahead of a massive rain storm that pummelled the state, the Marine Exchange of Southern California, which organises traffic, requested that vessels voluntarily go out to sea ahead of the windy weather, promising that vessels would not lose their spot in line if they did so. The major rain and windstorm caused flooding in much of the state and downed power lines but did not result in major incidents at sea involving large commercial vessels, said Coast Guard spokesman Amy Stork.

While traffic volumes have increased, Coast Guard operations have not changed very much, except that patrols of ships at anchor are being carried out more frequently, she said.

But in the end, mitigation measures can only go so far, Prof Tsimplis said.

“The availability of good weather warning systems is a given nowadays, but the exact way a weather system will impact a specific location and combine with the local currents is not easy to predict,” he said.