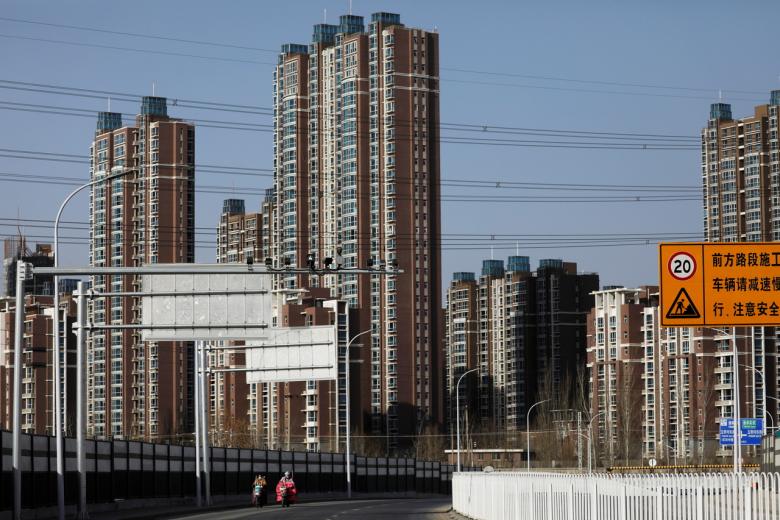 HONG KONG (BLOOMBERG) – Warnings that China’s campaign to cool its property market will go too far are multiplying.

Economists at Nomura Holdings are calling the curbs China’s “Volcker Moment” that will hurt the economy. The credit squeeze in the property sector is “unnecessarily aggressive” and may weigh on industrial demand and consumption, wrote colleagues at Bank of America Corp. A prominent Chinese economist cautioned of a potential crisis should home values drop below mortgages.

Stabilising China’s housing market under the mantra of “housing is for living, not for speculation” is one of the many campaigns being waged by President Xi Jinping as he seeks to reduce the cost of raising a family and defuse risks in the financial system. Yet, it is also one of the toughest goals to achieve given the vital importance of the sector to the economy – the industry accounts for more than 28 per cent of gross domestic output.

The regulatory tightening appears to be working, after monetary easing last year spurred price gains. Property loans rose at the slowest pace in eight years in the first seven months of the year, according to the banking and insurance regulator, while home price growth dipped to a six-month low in July.

Efforts to enforce discipline among over-leveraged property developers are also biting. Property firms defaulted on US$6.2 billion (S$8.35 billion) worth of high-yield debt through mid-August, or about US$1.3 billion more than the previous 12 years combined, according to Morgan Stanley.

Yet, concern is growing that the impact of such policies spiral out of control. Nomura sees property curbs accounting for more than half of the slowdown in economic growth in the second half of the year. Restrictions on the real estate market also affect the sale of construction materials, furniture and home appliances.

Reduced access to funding has exacerbated a liquidity crisis at China Evergrande Group, with Moody’s Investors Service on Tuesday (Sept 7) cutting its rating on the developer to Ca, which implies it is “likely in or very near default”. Evergrande’s US$305 billion in liabilities means any failure by the firm poses a threat to the financial system.

“A rapid slowdown in property sector activities could lead to a significant spillover effect,” wrote Bank of America’s Miao Ouyang and Helen Qiao in a Monday note. “While the motivation for such credit tightening was to stabilise leverage and rebalance the economy, the risk is rising for growth instability amid fast deleveraging.”

China has in recent months targeted everything from mortgage approvals and rates for first-time buyers, to home-rent growth in cities and the price premium for land. Chinese banks are being told to lower their lending to home buyers and several large cities recently suspended centralised land sales. Officials in May revived the idea of a national property tax.

“If one day the value of houses plunged below the mortgage value, people won’t even be able to repay their debt by selling the houses, and that would be a real crisis for the property market,” Mr Li Yang, chairman of the National Institution for Finance & Development, was cited as saying by the official Economic Daily. Mr Li spoke at a forum on Aug 29.

Perhaps the most visible shift has been the tightening of funding conditions for highly leveraged developers, who rely on access to the bond market, bank loans and trust loans for liquidity. Once-prolific offshore issuer Evergrande has not sold a single dollar note since January 2020. Yields on China’s dollar junk bonds, which are dominated by property firms, climbed last week to the highest level since the pandemic triggered a selloff in March 2020.

Real estate firms made up around 30 per cent of the first half’s defaults and some of their bonds are now blacklisted as collateral both onshore and offshore. Ping An Insurance (Group) in August said it set aside US$5.5 billion in provisions related to its investment in defaulter China Fortune Land Development Co.

“Markets over the near term need to be prepared for a likely marked growth slowdown, more developer defaults and home foreclosures and, perhaps some turmoil in stock markets,” Nomura economists led by Lu Ting wrote in a report last month.

There is little sign so far that Beijing will pull back on its measures. According to Morgan Stanley, local governments may make adjustments depending on the conditions in their housing market, but they will not be able to touch the “bottom lines” of home purchasing restrictions and caps on property prices.